Creating the Universe (Creating Heaven and Earth, People and Things)

You are here: Home / The law of universe / Creating the Universe (Creating Heaven and Earth, People and Things)

Scientists say: “A theory refers to a giant black hole. A black hole is like a press, material after being sucked and compressed will be released out through the white hole. The white hole is the opposite of the black hole, it is like a material exhaust valve, not only that it also provides energy for matter … The hypothesis that our universe was once formed in a giant black hole … and create a huge explosion that we call Big Bang recreating the universe”. The hypothesis has two major flaws:– The law of conservation of energy says: “Material in the universe does not generate itself, does not take away, only changes from one form to another”, scientists all acknowledge! So how did the explosion create matter ???

– Yijing has the law of Accumulation: ““Variables are gradual changes slowly … and Turn into transformations have been completed  …. Variables are gradual variables, Turn into is mutations. ” For example, eggs from chickens and ducks turn slowly into an animal that are still flipped eggs, until the beak expands to breathe air. The sky suddenly mutates in substance into animals, not without the mutation from the embryo into the animal’s shape. ; the fetus develops slowly in the womb until it becomes a fetus while still in the fetus, when born breaths the air Heaven creates a spirit of crying before cutting the umbilical cord mutated into child.

How did the Big Bang explosion transform gas into matter ???

“According to the ancient philosophy  of China , all things are derived from five elements  basic  are:  Golden, wood, fire, water, oxy (Wikipedia); “Everything in the universe is due to the operation (movement), and transformation of the five gases: Golden wood water fire soil” (five elements), it is the origin and background foundation for the birth and development of ancient philosophy.

It is: magnetism (ionic): Wood, optical (light): Needle, heat (heat): Fire (3 substances inside); hydro (steam), oxygen of Earth (2 external substances). Yijing says, “A standing object is a dead thing, a moving object is have yin and yang,” in the universe there is no dead thing, meaning 5 gases are always moving,   “in which yang  inside” ,

So Five gases:  magnetic, optical, thermal, Water and gas oxy., are also the Five Elements was born Tai chi, bipolar born; the five elements and the yin and yang turned out to be Heaven and Earth, people and everything.

It is the entire cosmic energy that creates life and movement, spawns Heaven and Earth, people and everything, and absolutely no black holes or explosions will create matter at all. 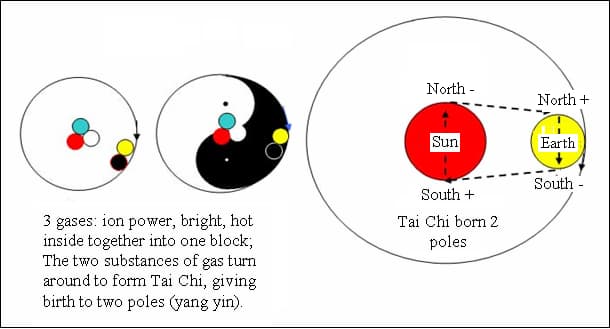 Yijing says, “nothing is not Tai chi..” With micro particles is atomic particle; the maximum is Heaven and Earth (inside the yang, the energy from photovoltaic is the Sun itself, the external yin air orbiting that energy is Earth).

– In the Sun: From the north, looking to the south, the sun will turn clockwise, the south canopy is yang, the north is retracted, yin

– on Earth: standing from the south looking to the north of the Earth turning clockwise, the north canopy is yang, the south inward is yin.

– The solar energy is released from the south, the Earth is absorbed by the south, move north. The northern sun yin retracts . Create closed current. That’s the reason the earth has negative electricity.

+ In the ground, the electric current creates a reaction that converts the carbon dioxide (collected by plants) into oxygen to supply the planet

+ The negative current in the earth attractive the yang  (ion pow shining, the heat) emitted by the Sun. The solar energy (yang) comes down and divides into many rays (see the rainbow where the Law of Absorption and Conversion of Energy) combines the oxygen, water vapor (yin) of the Earth born biochemical humans and thousands of things…

– Oxygen, steam intercourse in the face of the light rays (white) creates the most intelligent breed: it is human.

– Oxygen, steam intercourse with fire rays (red on one side) create a strong physical strengtha like tigers, lions … have body power without lucid wisdom.

The places behind the 3 natural gases produce low-level insects, plants … with the diffuse energy in the Earth’s crust creating diverse species and plants.

As mentioned above in the physical form of the universe is gas, how to form the body of all things?  Yijing says: “Gas gathers into form, scatter into gas”, all things can be in all three forms: gaseous, liquid and solid, for example when gathered is an iron rod, which melts into the water, continue cooking it will evaporate into gas; the fetus, or the egg and duck eggs, crystallizes in the ovule, the positive gas in the male is a liquid, and the embryo develops gradually into an animal.

How to operate metabolism please see the law of energy absorption and metabolism .

Over the millions of years from the first humans born to now saturated, solar energy is released on people and absorb all things, no longer for hybridization, but somewhere there are still some present. in the forest sometimes there are leaves that live underneath are a locust attached, or fig leaves have natural pimples inside which are winged insects, especially in the forest deep there are places where “forest people”  naked; See us run he away.

2.- In the heavenly realm

Yin-Yang  biochemical human and everything in the Earth outside the Earth’s crust, in another world, is biochemical inside the Sun.

The negative current carries steam, oxygen from the Earth. the Sun moves inside the Sun 2 gases in combination with 3 gases from the solar photovoltaic that generate Angel as follows:

– Because 3 substances ion power photovoltaic are not diffused as in the Earth’s crust, in the Upper World do not create as diverse animals and vegetation as on Earth, only a few high-class plants that people say “eat 1 peaches live for hundreds of years ”…Longevity has a part in food, such as Shakyamuni Buddha attained enlightenment for thousands of years, or Mr. Trang Trinh Nguyen Binh Khiem, who lived for more than 400 years.

In particular, the energy ion power light hot of the sun no diffusion Angel Knowledge deeply embraces the profound, reality of the whole world closely, even the thoughts in our minds are thorough.

1 / – Buddha and Man are born in 2 conditions with different crystalline energy; a person cannot become a Buddha; cultivating to become a Buddha is an illusion; but need to determine the purpose of cultivation is to improve health, extend life and expand wisdom, turn people into higher levels than the present life; contribute to turning the Earth into a heavenly earth, not looking for heaven or nirvana anywhere (see more cultivation articles on this website).

2 / – Lord Buddha and humans are born and live in different conditions, Buddha’s food is not the same as in the earth, so it is not recommended to worship cumbersome offerings , to worship the Buddha just needs water, if can add flowers, should not provide food including fruit tea,  superiors do not eat earthly products.

3 / – Heaven and Buddha have a clear position in the upper world, earthly people believe and worship God, there is a saying “Buddha at heart” every family only needs a red silk screen with swastika (卍) gold words as well.

At home create statues worship is not good, on blessing only when worshiping, the remaining time ma entered into causing trouble for the family.